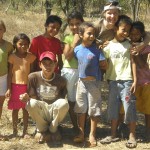 Boulder, CO, February 24, 2009:  The Advisory Board and Staff of Philanthropiece Foundation have just returned from an engaging and educational trip to rural Nicaragua.  Philanthropiece went to Nicaragua on a ten day trip with the intention of learning about the efforts of different NGO’s working in Latin America.  They met with Acción Médica Cristiana, Dos Generaciones, El Porvenir, and Boulder Jalapa Friendship Cities Project.

The trip began with a tour of Managua, including a drive through La Chureca with Dos Generaciones.  La Chureca is the city dump and home to over 1500 people.  Dos Generaciones works with the street children living in and around La Chureca.  Philanthropiece then traveled to El Sauce, and spent three days building a lavandero (community wash station) alongside the community members of Los Rochas.  This portion of the trip was in coordination with the non-government organization, El Porvenir (www.elporvenir.org).  El Porvenir supports self–help, community–initiated water, sanitation and reforestation projects and is based in Nicaragua with a U.S. office in Denver, CO.   “I was impressed with the efficiency and direction of El Porvenir.  They have a clear issue they are addressing (clean water and sanitation) that is community driven and they are very effective with the use of volunteers and local community members” said Joanie Knudson, Co-Director of Philanthropiece.

Philanthropiece also traveled to Jalapa, sister city to Boulder.  Board and staff had the opportunity to tour gardens as part of the “Huertos Familiares” (family gardens) project and artisan cooperatives supported by the Boulder Jalapa Friendship Cities Project (FCP) (www.boulderjalapa.org).  “We were so excited to have visitors from Boulder and to show off all the great work that FCP is doing in Jalapa” said Hannah Egan, in-country representative of FCP.  Philanthropiece was particularly impressed with the Jalapa Women’s Foundation, working on health issues related to HPV and cervical cancer.

Members of Philanthropiece left Nicaragua inspired and committed to improving the quality of life in the communities where we work.  Philanthropiece is a Boulder, Colorado based nonprofit organization that engages in broad based community development work with a current geographic focus in Central/South America.  Areas of need addressed include education, health initiatives, environmental issues and business and economic opportunity.  Philanthropiece is currently administering projects in Laguna San Ignacio, Baja California, Mexico and the Ixil region of Guatemala.  Philanthropiece is a U.S. 501(c)3 operating foundation and is not a grant making organization.