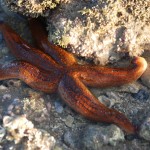 Two times a month, when the moon is at its fullest and when it is just a sliver in the night sky, the tides recede far enough to reveal rocks and tidal pools that lay in the outstretches of beach just outside mi casa.  On one such day, Martina, the daughter of Antonio & Maria, the family gracious enough to host this gringa, asked me if I wanted to go look for pulpo (octopus) with her.  Intrigued, I rolled up my pants and left my flip-flops on the beach, slowly traversing the soft rippled sand and piles of seaweed to the rocks and pools that keep the octopus hidden.

Martina was already out ahead of me and soon motioned me to hurry over.  “There,” she said “See it?”  But I couldn’t see anything other than rocks and reflections of the sunlight playing on the water.  And then, the dead give-away of the octopus- a small spurt of water shot out from under the rock.  This is one of the only ways to find these elusive creatures, since they slip down into the sand, hiding themselves in self-made caves. Normally, in the open ocean, octopus are masters of camouflage, changing colors to blend into their environment.  But in the low tides, their only protection is to hide, and given that they still need to circulate the water through their systems, it becomes their one weakness, the action that reveals them to the keen eyes of those who know what to look for, those like Martina.

Quickly, Martina dug in to the sand, broke away the soft rock, and pulled the octopus out from its hiding spot.  With a deftness that comes from years of pulpo hunting, she quickly turned the octopus inside out, and tore out its gut. Ink spilled out over her hands, and dripped into the water.  I was, at once, horrified and extremely impressed. She thrust the writhing creature towards me, but I just stood there, stunned.  “The bag,” she coached, “the bag.”

I mechanically pulled out the plastic bag she had handed me earlier and opened it up and she dropped the octopus inside.  After a few more moments of recovery, I explained to Martina in my fledgling Spanish that I could help her look for more octopus, but I was not quite ready to rip their guts out yet.

We kept at it for a while, ultimately sacking about 10 octopus, before we headed further out into the soft sand to dig for clams.  At one point, Martina turned to me and asked “It’s so much better here than the city, isn’t it?” I shot her back a quizzical look and she elaborated.  “Here, any time you’re hungry, you just come out to the ocean and can find what you need.”  And I couldn’t help but agree.  I have seen this family bring in halibut, scallops, sea bass and lobster from this water- everyday there seems to be a new ‘catch of the day’, a new food to be thankful for. The ocean is their pantry and having grown up their whole lives here, they have an intimate knowledge and interaction with their environment.  This interaction exudes respect and meets their needs at the same time, a balance many are now lacking between their food and its place of origin.

As the sun set over the water, we made our way back to the kitchen, with a bucket full of chocolate clams and a bag full of octopus.  We

blanched the octopus to remove their outside skin and diced them into small pieces, and made a ceviche of sorts, with onion, tomato, cilantro and lime juice.  We sat and ate our freshly caught snack in the last warmth of the sun and then a thought hit me that caused me pause.  At some point, if I was to truly appreciate the full flavor of the catch of the day, it would be my hands, not Martina’s, that would be stained with ink come dinner time.