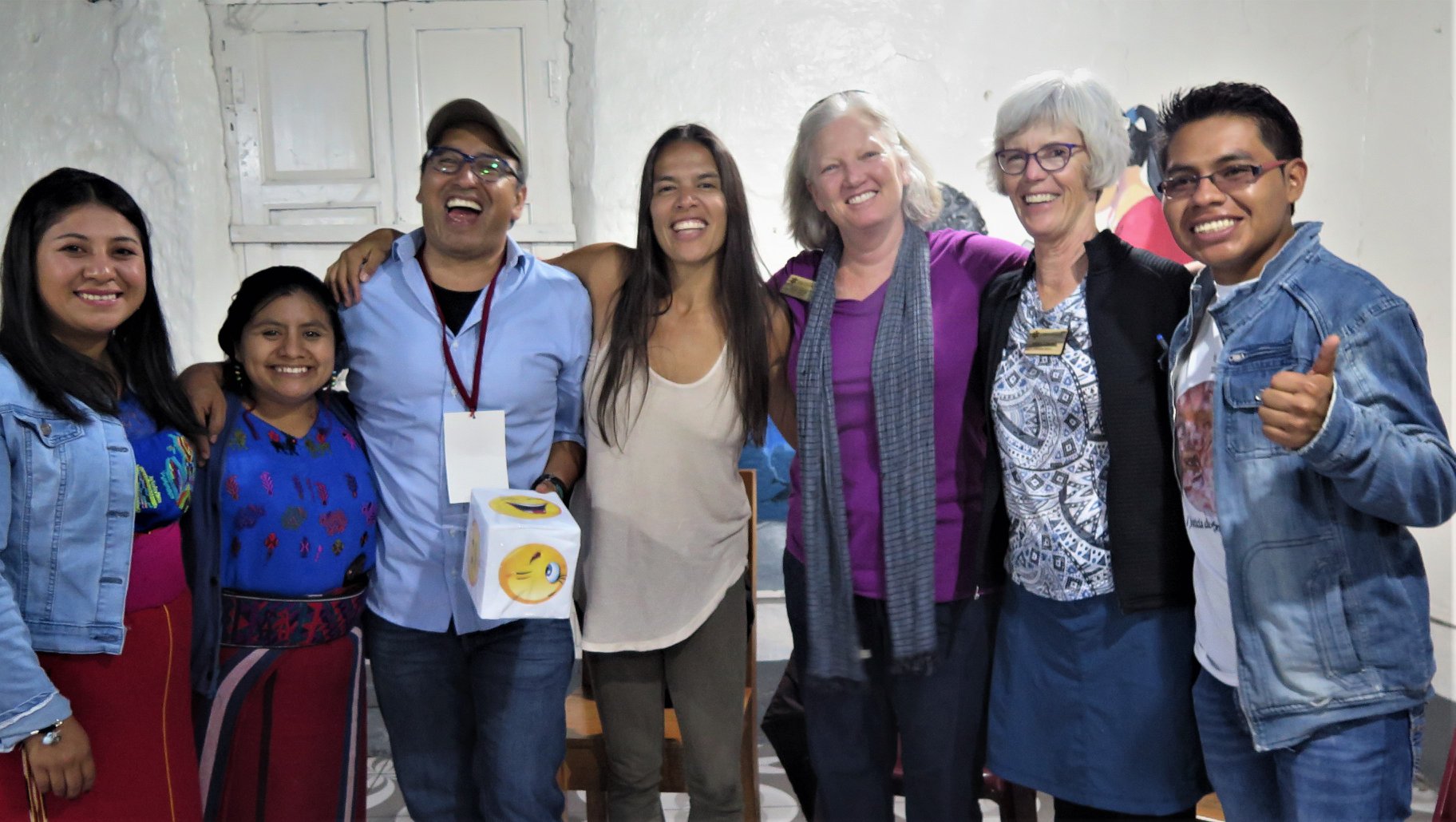 Insight into Identity: Reflections on our Advisory Board Trip to Guatemala

On the final evening of a recent Advisory Board insight trip to Guatemala, one of Philanthropiece’s long-time Guatemalan drivers, Manuel, took Violeta Chapin aside to share some thoughts with her. Violeta is one of the newest members of the Philanthropiece Board, and the Insight Trip was the first time she had spent significant time in Guatemala getting to know more about our programs and partners there.

“I’m so glad to see someone from Central America on the Philanthropiece Board,” Manuel told Violeta. The conversation with Manuel allowed Violeta to reflect upon her developing role as a new board member.

“It is so interesting because I don’t consider myself from Central America at all, but I was born in Costa Rica, my family is from El Salvador, I speak fluent Spanish, and I look the way that I look. I had told Manuel a lot of my backstory and so what I think he saw – and what I think a lot of the [Guatemalan] students saw in me – is that they think, ‘You are one of us.’ And I’m super delighted for that, if that is how they see me. I am delighted to be brought into this fold, to be a part of this and to also represent Philanthropiece in that way,” Violeta says. 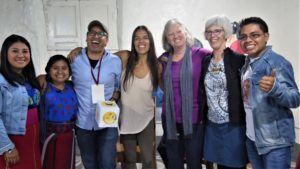 Violeta Chapin, center (in white shirt), in Chajul during the Advisory Board Insight trip, with (from left to right): Elicia Asicona, Ernesto Perez, Julie Moyle, Nancy Stevens, and Camilo Ramírez.

From the time she was a child growing up in a diverse community in Arlington, Virginia, through her years as a Sociology student at Columbia University, and presently in her role as a professor leading the Criminal and Immigration Defense Clinic at CU Boulder, ideas around her identity as a person of color have deeply woven themselves into all that she does. She recounts a story from when she was a young girl coming to terms with concepts around race and identity.

“I remember, in school, I marked White on one of the tests we were having and the guidance counselor called me into the office and asked ‘Why did you mark White on here?’ And I said I didn’t know. And she said ‘You are not white. You should mark Latina on here. It will help you in getting through school. You should always mark Hispanic/Latina,’” Violeta recounts.

Violeta went home and told her parents about the experience she had had at school with the guidance counselor.

“My dad was not happy with that. I’ve always had a very open relationship with my parents, and we’ve been able to talk about things like this. And my dad was like, ‘They should have a box that says Human!’” Violeta says.

Violeta’s father is white. But her Latina mother had a different take on Violeta’s experience with the guidance counselor. Her mother disagreed with her father, saying that it was his privilege as a white person to think about marking a box labeled Human. To Violeta’s mother, if marking Hispanic/Latina helped her daughter gain certain advantages in school, then Violeta had every right to mark that box.

When the time came for Violeta to apply to college, she did mark that box on her application, and it led her to meet other students of color when she went to Columbia University, deepening her identity as a person of color.

“Society starts to create a person’s identity. And then you begin to identify with that. And I did, very much. By the time I got to Columbia, the first people who knocked on my door were students from Alianza Latinoamericana,” Violeta says.

She began spending time with students of color, and many of those students were involved in political activism. Inspired by several prominent Sociology professors, Violeta learned about broader issues facing communities of color – how those communities had developed in society and how the government had treated those communities, how poverty had been systematized within communities of color. As her undergraduate studies progressed, she ultimately decided she wanted to pursue a career as a lawyer to address some of the issues she had been learning about.

“I was so upset about this deeply-entrenched inequality and poverty and decided that I wanted to work with people and figure out a way to change it. As a woman, as a person of color, it was important for me to have some power on behalf of disenfranchised people. So, I decided to become a lawyer. And when I got to law school, I got there with the very clear idea that I was not going to be a lawyer for rich people. I decided that I was going to work on behalf of people who have less access to justice or less access to wealth, who have less access to being heard. And I was going to help them be heard, in whatever way I could,” Violeta says.

After law school, Violeta worked for seven years as a Public Defender in Washington D.C., where she often represented low-income persons of color, many of whom were black. She was then hired as a professor at CU Boulder to teach the Criminal Defense Law Clinic. Being one of the few bilingual lawyers on faculty, she began receiving more referrals to represent Spanish-speaking clients. Because some of those clients were not citizens, Violeta started to integrate immigration law into the work she did and into what she was teaching criminal defense law students at the clinic. Violeta welcomed the opportunity to work more directly with Spanish-speaking clients.

“It has felt awesome to be working more with Latino people. I have loved moving into that space of being around mi gente. I feel extraordinarily protective of them. And one of the great things is that many of my clients, they are just so proud to have someone who is Latino, who looks like them, who is a lawyer. There is a comfort for the clients, to be working with someone who is Latino and who is a Spanish speaker, but there is also a tremendous amount of pride. To have the language connection and the background connection has been great,” Violeta says.

During the recent board Insight trip to Guatemala, Violeta shared her knowledge of Immigration Law as it relates to the U.S. legal system with the community of Chajul. She gave two talks on the legal aspects and challenges that immigrants to the United States could face. Issues surrounding immigration are very relevant for the community of Chajul, and students questioned Violeta after her talk. Beyond the legal information she shared, Violeta also created a bond with the students through a shared sense of identity and language. 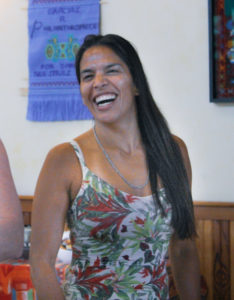 “In speaking with the students, several of them told me that is was great to be able to speak to me directly in Spanish. Meeting those young people was really impressive for me. They are making a real, tangible difference in their community. That experience solidified for me that Philanthropiece is working as an ally in the community and I am delighted to be part of the organization because of what I learned on the trip,” Violeta says.

As the trip wrapped up and Violeta had to say good-bye to all of the students and staff of Filantropis in Chajul, she had a surge of emotion. For her, it connected to issues surrounding her relationship to her El Salvadoran family and to her identity as an American.

“My whole life, we have had to go to El Salvador to visit my family and that is because the United States has never permitted my family to come lawfully to the U.S to visit me. I am super close to my cousin Carlos. We have been close since he was a baby. We used to go to El Salvador fairly frequently and in all of the pictures of the family, Carlos is always with me. He is my heart. When I got to college in New York, all I wanted was for Carlos to come visit me in New York and to see New York. I wanted for him to see what I was seeing.”

When Carlos was 18, he applied for a tourist visa to visit the United States but he was denied. He applied several other times, each time paying $400, but he was quickly denied each time. Violeta felt a lot of resentment towards the United States. And those complicated feelings came to the surface as she said good-bye to the students of Chajul.

“I wanted to say to them: ‘I appreciate the power of my passport to come here and to be able to visit you and to be in your space and to see your homes and to see the work that you are doing. I am deeply ashamed that my country doesn’t allow you to come and visit us in Colorado and I am sorry for that. Because I now see you and I love you,’” Violeta says.

“It is very hard for me because I am American and I wish that we could be better. I wish that we were more fair, and I wish we were more kind. And we’re just not. And I feel that in the work that I do, one of the main things that sustains me is that, I hope that I am bringing a little more comfort and kindness into the world. If my work allows me to do that, then I am deeply grateful for the work.”

Morning Glory Farr serves as both a writer and Advisory Board member for Philanthropiece. Her work with the foundation included living in Chajul, Guatemala for six months as the foundation began to build relationships in the community and work alongside partner Limitless Horizons Ixil.