Lately, the staff of Philanthropiece A.C. in Mexico have been quite ‘unreasonable.’ Well, Martha Marquez and Martha Drew have been unreasonable, but in a very well-considered, intentional way. They recently wrapped up a three-week SAFINN program (“Salud financiera,” financial health in English) with the Instituto Irrazonable, an entrepreneurship training-center that emerged from Boulder, Colo.’s Uncharted (formally, the Unreasonable Institute). The Irrazonable program was focused around uniting organizations and entrepreneurs to expand their vision, improve their leadership skills and deepen the impact on the clients and communities with whom they work. The program consisted of a series of workshops and direct mentorship sessions with 20 business leaders in Mexico.

This year, the Instituto chose 10 teams out of 280 applicants, centering around the theme of “changing the rules of financial education.” José Medina, cofounder of the Irrazonable Instituto in Mexico, invited Philanthropiece A.C. to apply. Philanthropiece A.C., affectionately known as the “Association,” is based in Baja California Sur, Mexico, and is currently focused on community savings groups and financial education programs. Martha Drew, Regional Coordinator for Philanthropiece A.C., feels that being accepted into the program this year is a continuation of the Association’s goal of broadening its organizational reach. 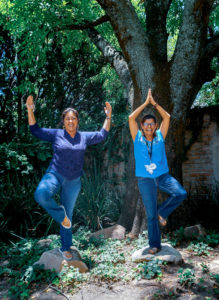 “About a year ago, we started talking to many organizations out in the community about entrepreneurship and about expanding the programs of the Association, because we were looking to better serve our communities. That led us to José Medina. We had a call introducing ourselves to José and then later, he decided to call us and make a special invitation to apply to the program this year,” explained Drew.

During the three weeks, Marquez and Drew gained clarity on steps that could be taken for the larger vision of the Association and for addressing more specific needs of the savings groups. Overwhelmingly, they heard that Philanthropiece A.C. could benefit from crafting a more expansive narrative around the impact that they are having on communities. Since the idea of narrative has also come up in conversations between the Association and Philanthropiece Colorado, working through the idea during the Irrazonable program helped to further crystallize the importance of a comprehensive narrative.

“Our mission is not just about bringing people together to save money. Our larger mission is to help organize communities, to help give them tools so that they can more readily recognize the resources available to them. We’re able to serve as a platform for bringing people together, so that they can solve bigger problems for themselves,” said Drew.

As a step towards better understanding the current impact of their programs, Marquez and Drew did exercises examining the socio-economic strata of Mexican society.

“We realized that we are working with lower and middle-lower economic groups of people. Through these exercises, we understood that the way that they are saving right now is very helpful for the short-term needs; they are capable of meeting day-to-day needs. But we are not currently offering a long-term solution to overcome more entrenched struggles of poverty,” said Drew.

They also broadened their concept of whom their programs are currently impacting.

“Now, we have a different focus on how our members are impacting the wider community. Each member of a savings group represents an entire family and therefore, that makes the number of people who are a part of the savings group much bigger. And this means we can reach out to a much larger part of the community,” said Drew.

As a way to give their work and impact a sharper focus, Marquez and Drew realized the necessity of measuring and digitizing the information regarding whom they work with and all of the accomplishments those members have achieved. This process of creating a digital version of program metrics, while further solidifying their narrative, also serves the larger purpose of helping them diversify their funding. The importance of fund diversification was another key take-away for the Association staff during the program.

“If we want to be financially sustainable into the future, we would like to find new sources of funding. And to apply for certain funds in Mexico, we need to complete some national requirements to formally establish the Association. One of those requirements is to digitally standardize our information. For example, how many people belong to each savings group, how is the group growing, how long have they been meeting? That information is helpful to our narrative and it helps us towards our financial goals, so it’s all interrelated,” said Drew.

As part of building a network which could offer funding and other collaborative opportunities, Márquez and Drew made connections with a variety of non profit organizations during the SAFINN program. These include Somos Via AC, Rutopia, and Fundación Mitz, all based in Mexico. The staff of the Association has continued to communicate with the organizations about ways in which they can support each other’s work after the Instituto program.

One of the other key ideas generated during the program was the importance of establishing an Advisory Council made up of community members. While the Association already has a Board of Directors, the community Advisory Council would allow the Association to receive input directly from the communities that it seeks to serve. It would allow them to better understand the unique needs and wants of each community. In illustrating how important direct communication with community members is, Martha Drew explained that during the Irrazonable program, some of the mentors had suggested that one way to offer more financial stability for families and community members might be to get them tied to formal banks. But because the Association’s staff has open communication with their savings group members, Drew had a different take on this idea.

“What we have observed with our members is that people would much rather keep their money in the [savings group] box. They feel that is the safest way for them to have control over their money. They are rural communities; it is not their preference to take their money to a formal bank,” explained Drew.

Besides delving into all the areas where Philanthropiece A.C. can continue to improve and grow, the Irrazonable program also gave Marquez and Drew a chance to celebrate how much they have already accomplished as an organization and as a staff.

“The mentors validated for us many times that we have a great organization and that we are doing very valuable work in the community. They reflected that since we have created such a well-organized structure for these groups, they have continued to meet together year after year. And this longevity and solid structure is what will give us more capacity to impact these communities in the future,” said Drew.