I’m Not Special: Rethink How You Talk About the Parkland Kids (and Me)

A while ago, I read something that I haven’t been able to get out of my mind. “Go Ahead, Millennials, Destroy Us”, Tim Kreider’s op-ed for the New York Times, has received praise and criticism alike.

This is a little bit of both.

In case you couldn’t glean the theme of the piece from its title, here’s a little taste:

“[Adults] are afraid of you. They don’t understand you. And they know you’re going to replace them. My message, as an aging Gen X-er to millennials and those coming after them, is: Go get us. Take us down — all those cringing provincials who still think climate change is a hoax, that being transgender is a fad or that “socialism” means purges and re-education camps. Rid the world of all our outmoded opinions . . .  — rip it all to the ground. I for one can’t wait till we’re gone. I just wish I could live to see the world without us.”

As a teenage activist, it is refreshing to see an adult admit culpability, even if it kind of comes in the form of an apology for an entire generation of “cringing provincials.” I have to admit, it’s an interesting read. But it leaves me feeling so alone.

Kreider praises the Parkland kids — indeed, youth in general — as cleareyed vigilantes, touched by violence but not by cynicism. It’s just not the truth.

Kreider’s refrain isn’t one I’ve never heard before. Ever since my sophomore year of high school, I’ve spent a good amount of time in social justice spheres where most everyone is a decade older than me. In these spaces, I usually feel respected — rarely regarded as selfish, confused, irresponsible, or any of the other stereotypes thrust upon teenagers. In fact, I am often praised simply for showing up, receiving comments like: 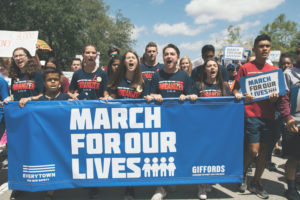 I’ve met others like me. Last month during the White Privilege Conference in Grand Rapids, Michigan, I heard disabled activist Eli Clare say in his keynote, “Not long ago, a white woman … grabbed me in a bear hug and whispered in my ear that if I were trained, I could become a great healer. As she released me from her grip, she directed me never to forget my specialness. Oh, how special disabled people are: we have special education and special needs. That word drips condescension. It’s no better than being defective.”

There’s been scientific research on “specialness,” too. In a phenomenon known as adultification, black girls are sexualized as young as five years old and viewed as less innocent, more mature, more knowledgeable about sex, and less in need of protection than their white counterparts. This might explain why they’re more likely to be subject to suspension/expulsion and low doses of painkillers — and less likely to report sexual abuse.

Lest you still think this is an unpopular opinion, a quick Google search reveals a host of articles written by disabled, mentally ill, and transgender writers, all of which contain the phrase “Don’t call me brave.”

Age and ability and race and gender are very different, and I’m not trying to draw direct analogies. But the takeaway is this: Tokenizing people as inspirational and unshakeable can be detrimental to their wellbeing.

It is dangerous to regard me as weak, incapable, ignorant, or apathetic. But it can be equally as harmful to consider me mature, unafraid, and less in need of support.

Adults: I need support, so don’t use praise as a way to back out of allyship.

There are “cringing provincials” in my generation, too. I’m tired of the idea that once the Gen X-ers die, there will be some kind of New World Order. That would be too easy. Racism and sexism and ableism have maintained their status quo for hundreds of years, and will perpetuate unless every single one of us — young and old — joins the fight.

Adults: I don’t need your permission to change the world. I’m going to do it with or without you. But if you share the burden, if you stand with me in solidarity… maybe I’ll actually have time to be a kid, too.