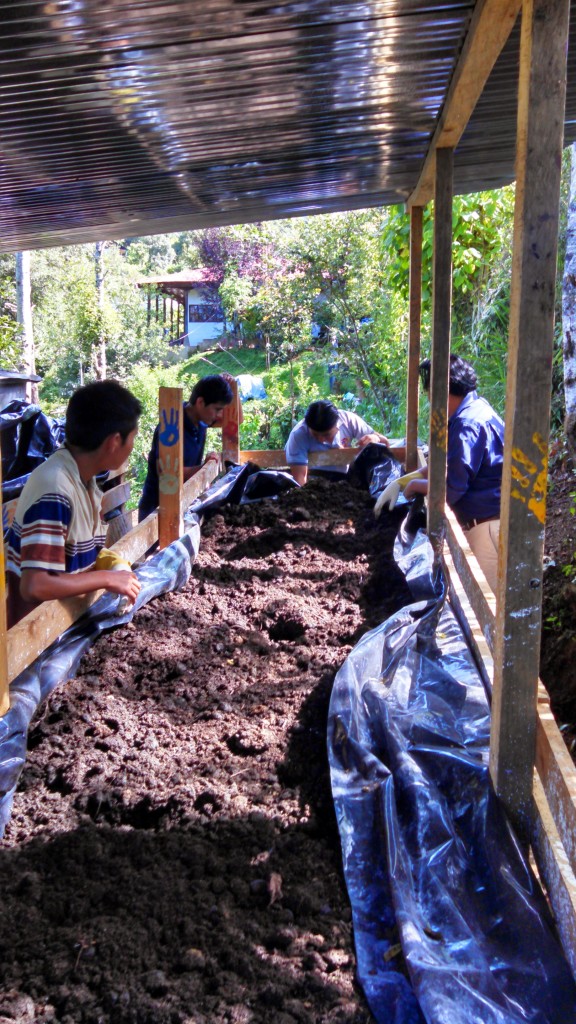 Creating Change, One Worm at a Time

The Philanthropiece Scholars in Chajul, Guatemala are putting their training into action by creating social ventures that will lead to positive change in their local community. In this blog post, Jake Matlak, our Associate Director of Programs, describes the “Lombricomposto” – vermiculture – project that is being developed by the Scholars’ sustainable agriculture team.

The Philanthropiece Scholars’ sustainable agriculture team is made up by Chajulense youth Tomás Marciano, Camilo, William and Eliseo. The initial idea of a project around worm compost has launched, and is now being run in conjunction with an organic garden plot. This social venture holds potential to not only be a project that positively impacts the community and the environment, but also a viable and scalable business model.

The current operations of the lombricompost project starts with purchasing cow manure from local farmers (the team is in the process of investigating ways to cut out this cost and to collect the manure or other organic matter for free). This manure is put into the worm bins and the worms go to work, eating microorganisms in the manure and defecating out wonderful fertilizer. The Scholars have recently completed their first harvest, bagging and bottling the fertilizer to sell it as an alternative to chemicals.

Throughout the development of the project, the Scholars have leveraged key partnerships. They are currently using, without charge, a plot of land owned by the Asociación Chajulense, who liked the sound of the program and agreed to support. The team later collaborated with Limitless Horizons Ixil, San Gaspar Middle School, and Texas A&M University to get both funding and labor for their project. Two groups of TAMU students came to Chajul and funded and helped construct a large worm compost operation and helped to prepare the garden plot and to plant some vegetables. The San Gaspar students helped in the process and received education on the topics along the way. This team of Scholars has also invested in training with agronomists for technical assistance and a workshop with Atitlan Organics, a permaculture farm on Lake Atitlan. In addition, they have presented the project to the mayor of Chajul, who responded with a donation of  tools.

The team has done some relatively sophisticated analysis to break down the cost per bag/bottle of their compost, and found that it is 50-70% cheaper than the chemical fertilizers typically used in the region. Unfortunately, those fertilizers are often given away by political candidates in an attempt to buy votes. The real question, however, will be the effectiveness of their product. They know it is a good fertilizer, but they are still working to get a laboratory test done to verify the actual quantities of nutrients.

The Scholars feel that perhaps their greatest struggle will be convincing farmers that using an organic compost is superior to the chemical fertilizer they have grown accustomed to using. Eliseo said, “If I can’t even convince my own father to make the change, there is no way we will have success.” The response then, is to show farmers first-hand how effective the compost can be. Hence, the test garden. The goal is to create a functioning garden plot that employs many of the permaculture principles they are using. The team can use their own compost to grow vegetables to sell in market as well as create a site for interested farmers to visit and learn.

This project is very exciting in that it is already bearing fruit, but also because of the way it has ignited passion in the students. The team is excited to learn more and grow. Every week, the Scholars are tasked to experiment and cultivate something they designed. It inspires them to learn new skills; Tomás and Camilo had little accounting experience, but suddenly realized they had to learn in order to develop their budget. The project has pushed them to visit other places, talk with the mayor, and collaborate with people from another country. There is no guarantee that it will turn into a successful business, but in terms of meeting our program goal of providing a laboratory for students to develop skills and learn how to be changemakers, this project hits the mark.