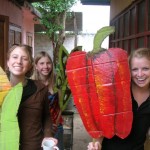 On July 8, 2009, Beth Osnes did her interactive “Mothers Acting Up” workshop with mothers in Chajul, Guatemala. Chajul is a very rural, small town in the highlands, part of the Ixil Region where life seems hard and slow. When it rains in Chajul, the streets are fairy quite, as the local stay in their home. On this day however, the mothers of Chajul went out in the pouring rain in their sandals, traditional huipils, and holding scarves over their head to make it to Beth’s workshop. There was an endless flow of mothers it seemed coming in the door – some with 3 or 4 children, some breastfeeding, some soaking wet – until almost 100 people filled the room.

The workshop was very impassioned and powerful. After warming up their bodies and voices, each mother in the workshop used her voice to speak on behalf of her most passionate concern. Beth proceeded to organize the women to act out some of these concerns. One skit focused on the mothers speaking to the heads of their children’s schools. The energy was exciting and endless and it seemed that not one of the mothers failed to personally thank Beth before they left the room.