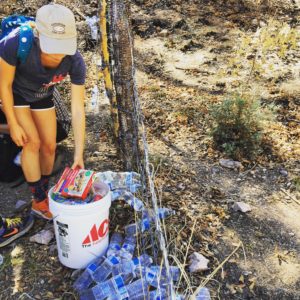 Each summer, our Youth Global Leadership program participants take a journey within the United States to gain a deeper understanding on themes related to social and environmental justice. These amazing young changemakers document their journey throughout the trip via blog posts, a mini-documentary (coming soon), and individual “synthesis projects.” Here’s the latest installment about the 2017 Insight Trip that is taking place throughout the Southwestern U.S.

After a two hour drive to Albuquerque and saying goodbye to Neda, Grace, and Maddie, we headed to Elephant Butte State Park. We were able to swim in the lake, eat delicious quesadillas prepared by Jake (or John as we recently discovered), and celebrate Alicia’s birthday. In the morning, we all discovered our new-found identities as highly-skilled outdoors (wo)men when we packed up the tents and the UHAUL in under 30 minutes and then left for Tucson, Arizona. When we arrived at BorderLinks we discussed our group acuerdos (agreements), different educational systems, and some big and little questions we all had.

In jeans and nice shirts with the Arizona sun beating down on us, we walked to the federal courthouse here in Tucson in order to witness Operation Streamline, the governmental response to an overburdened immigration system. We saw 73 men and women get deported or given jail time in only two hours. This process continues day in and day out every week.

For everyone, this experience was extremely powerful and we began to understand on a deeper level the dehumanization caused by our immigration system. Human beings are treated like cattle on an assembly line and their individual stories are not considered. This stands in stark contrast to the work we’ve been doing to understand the complexity that underlies everyone’s experience. Operation Streamline is an example of the way our society treats some individuals as expendable. Our time sitting in the courtroom as witnesses motivated us to change that dynamic and return dignity and justice to everyone.

In the morning we heard a presentation from Dan Millis, who works for the Sierra Club, which is the oldest environmental justice organization in the United States. He talked about the environmental consequences of building a wall along the border. He challenged us to think of the border as more than a line on a map, a place of danger, or a barbed wire fence.  Instead, we can see the border as the Rio Grande River that runs along 1,252 miles of the Mexican-U.S. border, or the multitude of plants and animals that live in those areas whose homes are being cut into two. We then met with Karolina from Mariposas Sin Fronteras,  an organization that works with LGBTQ+ people who are stuck in detention. They write letters of recommendation or support, provide dignified work for detainees after being released, promote visitation programs, and raise money to pay bonds. Karolina shared her own story about being persecuted in Mexico and the U.S. for being transgender. Her story highlights the immense amount of abuse and hardships people, specifically LGBTQ+ people, experience when immigrating. Over dinner we met with Dario from Scholarships A-Z, an organization that provides resources and scholarships to students, families, and educators in order to make higher education accessible to all, regardless of immigration status. He also talked about his own personal experience and the benefits and challenges of being a DACA (Deferred Action for Childhood Arrivals) recipient. Dario’s story helped us understand the constant anxiety associated with being undocumented, living in fear of being ripped away from your family.

Today began with an early start at 5:30 AM when we left for Walker Canyon with Brian Best, Executive Director of BorderLinks and a volunteer with the Samaritans. The Samaritans are a humanitarian organization that leaves food and water in the desert along migrant paths to ensure they do not die in the harsh conditions. The hike was seven miles in total, and our backpacks were heavy with water bottles and packages of granola bars for our  aid drop. As the sun rose, the temperatures rose to 100 degrees. It was staggering to imagine immigrants marching days through these conditions. We considered what it meant to walk up to the border, which in this location was an insignificant barbed wire fence. We sat down and reflected on how we felt being in a place that, as a concept, has caused so many conflicts, deaths, and hardships. In reality, it was the arbitrary divide of a single landscape.

After the hike, we headed to Nogales: a city split in two by the border. At this location, it was a giant steel fence. The city is severed by this monstrosity that separates families and communities. We visited a memorial to Jose Antonio, a young boy from Mexico who was shot and killed by Border Patrol agents in 2010. He was on the Mexican side and, on his way home, when a Border Patrol agent opened fire, claiming to be shooting at a drug smuggler. Jose died while the agent has been transferred; the court case has been delayed over and over. Jose’s family awaits justice.  After visiting the border, we continued along the border to Arivaca, a small community on the Arizona side, where we met with a humanitarian aid office run by People Helping People. They work with the residents of Arivaca to save the lives of migrants who get lost or injured in the desert landscape. They protest the rapid militarization of border patrol they’ve witnessed in their community. Our experiences throughout the day demonstrated the importance of the humanitarian support that is happening in borderland communities.

One of the final puzzle pieces to understanding immigration issues in the borderlands was visiting a detention center. We drove an hour and a half to the Florence Detention Center where we, working in collaboration with Mariposas Sin Fronteras, each got to meet with a detainee. Some of us left feeling a great weight upon our hearts while others surprisingly left feeling hopeful and inspired by the real people met inside. Although there were complications and Border Patrol was hesitant to let us in as minors, we were all extremely moved and rocked by these personal experiences. Many of us hope to keep in contact with those we met.

Throughout these past couple of days, and on a larger scale throughout the whole Insight Trip, I have been incredibly moved by the perseverance and acts of resistance shown within communities. I’ve realized the importance of acknowledging my own privilege and going beyond the feelings of guilt that accompany that so I can use that privilege to help the cause. Understanding privilege starts with exploring your own history, how it motivates you, and how it allows you to relate to others and cultivate deep relationships. The stories that we have had heard throughout the trip have inspired me beyond belief and I have grown to have a deep appreciation for the importance of seeing the humanity behind issues and going beyond just understand the statistics. Everything that I have experienced on the Insight Trip will stick with me for forever. I am so incredibly grateful to be able to learn, grow, and explore in meaningful ways that most people, especially 16 year olds, can’t say they have experienced.   -Isabelle R.

These past few days at BorderLinks have been enlightening in many ways: from witnessing Operation Streamline to seeing the border in person to going to Florence Detention Center. We have experienced intense learning concerning the immigration system in the United States. Personally, I have appreciated the opportunity to be able to view a different perspective about immigration in America. Engaging in these heavy, yet necessary activities, impacted YGL as a group as well. Our deep reflections have allowed us to dive deeper into the issues regarding borders in our society today. It has been a privilege.   -Malaika P.

On Friday, I was privileged to meet a Guatemalan man being held in detention at Florence detention center.  He had lived in California for more than a decade with his wife and two little daughters before he went back to Guatemala to get his paperwork filed for legal residence and marriage to his wife, who is a citizen.  His visa was denied and he tried to come back across, but was caught and detained.  The judge gave him legal status in the US, but there was a misunderstanding and he was deported.   He stays positive in detention for his upcoming case on June 26th because of his powerful love for his family.  If there is anything I take away from this experience, its that everyone has a story, and that judgment can’t be passed on them until you know their story.  –Kira B.

Today, I had the privilege to meet with a man in the detention center in Florence, Arizona. He shared his story of oppression and injustice. After hearing his journey, I realized that within the country where he was seeking justice, there are many who don’t strive to create a fair and free environment. We saw examples of this while in communication with Border Patrol, while the officer asked for our papers that allowed us to stand near the wall. Or while trying to enter the detention center and guards wouldn’t let us stay because they were “concerned for our safety”. To me, it became far more apparent that they were concerned about the possibility of being sued or preventing people from learning about the immigration system than caring about the health of immigrants or their families. I am hoping that these last few days on the Insight Trip allow me to fully begin to understand how justice plays a role in the immigration system in the United States.  –Riley M.