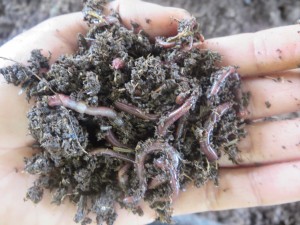 So Much More than Composting

The sustainable agriculture team is running a vermiculture project to create an organic fertilizer for their community, which is largely composed of coffee farmers.  They started with manure and introduced the worms, which churn out natural fertilizer.  After seven months, the project is finally coming to fruition.  In their own words, the Scholars have been producing fertilizer with worms to bring nutrients back to the soil and provide an alternative to harmful chemicals.  Now, they are getting to harvest the compost they and their worms have been working so hard to create.  The undertaking has been full of challenges, but each surprise has been a learning experience, and the Scholars are excited to begin the next steps of the process.

All the Scholars agree that the most important thing they are learning is the logistics of doing a project like this.  It is useful for them to have concrete experience since a lot of them will be studying agriculture.  They said that will be what an employer would find most attractive about this project: experience with agriculture.  My sense is that the Scholars are getting so much more out of this project than they currently recognize.  Here are just a few of the skills that they are learning to:

As a potential employer, I would look at all of that and see a team player who knows how to be innovative and find creative solutions; someone who has business skills, personal skills, and agriculture skills; someone who follows through and can prove it by showing the evolution of this project from start to finish; and a caring, conscientious individual who cares about the planet and its people and is willing to work hard to help them both.  This program not only creates fertilizer that has a multidimensional impact, the Scholars themselves are impacted and transformed.

Working as a team has been everyone’s favorite part of the venture so far.  They love when everybody is there having fun and getting things done at the same time.  They also enjoy hearing ideas from the other teams of Scholars that are working on different projects.  They appreciate each other and listen to each other’s suggestions, recognizing that each team has valuable areas of expertise that the others might not necessarily be as good at.  For example, the business team has helped the agricultural team with things like figuring out the cost of the compost and ways to sell it.

One challenge the group had to overcome was an army of tiny invaders in the compost: ants.  The ants attack the worms that are doing all the composting.  No worms, no compost.  After several ineffective attempts to solve the problem, the solution came quite unexpectedly.  One day, the Scholars were working on the compost and one of them accidentally dropped a chip they were eating into the dirt.  The ants swarmed it immediately and started attacking the food instead of the worms.  Even weeks later in a different country, I can still see the light bulbs turning on in that moment.  Now the Scholars purposefully use the chips to draw the ants away from the compost so they can remove them.  While entertaining, this is more than just a fun story.  The most obvious result is that it solved their ant problem, but it also would be the perfect anecdote to show creative problem solving skills in a cover letter or a job interview.

So What Comes Next?

The next steps for the group are actually harvesting the compost and finding customers to sell it to.  They have already established one client: the Asociación Chajulense is excited to use the chemical-free fertilizer to support their organic coffee production.  Hopefully, local farmers will start using the product too, but first the Scholars have to convince them that it is better than the chemical fertilizers the community is currently using.  They plan to do this by gathering the community together and explaining to them how their organic vermicompost is better for the environment and human health than harmful chemicals, and it’s cheaper!  They’ll be giving out free samples so that the community members can see how it works and compare it with the chemical fertilizer, risk free.  As the Scholars were describing this to me, they focused on the final goal of selling the product, but all I could think was, “Wow! You’re actually giving a pitch and getting real world marketing experience!”  I asked them if they were nervous and they said, “Not at all!”  Then again, after proposing their idea to the local government and requesting donations and materials, giving an informal presentation to their friends and neighbors would seem like nothing.

Even before starting the harvesting and sales phase, the Scholars are already starting to look beyond. They are considering the cost-benefit ratio, the value of providing training for others to make their own compost, expanding their market, as well as other agriculture related projects such as trout farming, reforestation projects, and greenhouse vegetable production. While these may seem to be big leaps at first glance, after talking to the Scholars for just an hour and seeing all the transferable and practical skills they are gaining from this project, I have no doubt that these inspiring young people really can accomplish whatever they set their minds to.

Caitlin Mendenhall, a recent graduate of University of Denver in International Studies and Spanish (woohoo!), is a current Program Intern at Philanthropiece.  She is passionate about education and sustainable community development, especially in Latin America.