Hit enter to search or ESC to close
Filantropis Guatemala

Focusing on Malnutrition: The Key to Educational and Economic Advancement

“A safe and nutritionally adequate diet is a basic individual right and an essential condition for sustainable development, especially in developing countries.” – Gro Harlem Brundtland 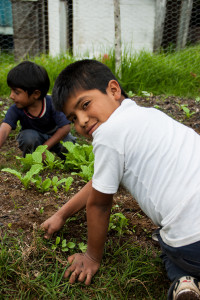 Hunger and malnutrition are very real problems plaguing a huge percentage  of people in Guatemala. And the problem is even worse in rural and indigenous communities including the areas where Philanthropiece works. Guatemala has the fourth highest rate of malnutrition in the world, higher than any other country in the Western Hemisphere and higher than most African countries. According to the World Food Program, nearly 50% of children are malnourished and the rate is even higher for rural and indigenous populations where the rate can reach 70%.

These high malnutrition rates have huge consequences for health, education, and economic development. Malnutrition in Guatemala causes severely stunted growth and it weakens the immune system, making it difficult for children to fight off common illnesses. Children who are malnourished also have diminished mental capacity and in the future will have decreased earning power. In fact, several studies found that adding a nutrition supplement to a child’s diet before the age of two, led to an average increase of 46% in wages for men (Effect of a nutrition intervention during early childhood on economic productivity in Guatemalan Adults, 2008). This indicates that investments in early childhood nutrition can be long-term drivers of economic growth. Unfortunately, such high wage increases were not observed in women (likely because of the lack of employment opportunities outside the agricultural sphere), even though they attained significantly higher academic achievement (Long Term Effect of Early Childhood Nutrition, 2008). Children exposed to nutrition supplements had substantial gains in schooling and scored considerably better on reading comprehension tests. However, the benefits of improved nutrition for educational attainment are lost if children receive little or no education. This interaction shows that the educational performance was best when both improved nutrition and educational opportunities were available. Thus, in order to maximize educational advancement it is necessary to focus on both better nutrition and schooling (The Relative Importance of Birth Size and Postnatal Growth for Women’s Educational Achievement, 2004)

Research in Guatemalan villages found that the first “thousand days of life” or from conception to age 2, is the most critical time for brain development and this is the time nutrition plays the most important role in a child’s development. In fact, it is the growth during that this time that has shown the greatest effects on later educational achievement and economic advancement (Relations between Nutrition and Cognition In Rural Guatemala, 1977). Because of this, most current nutrition interventions focus on improving nutrition during these years. However, this leaves gaps in interventions that focus on school age children. Even though nutrition programs after the age of three do not have the same effect on educational and economic advancement, there are other important health benefits to continue focusing on nutrition throughout childhood and even in to adulthood. A team of Philanthropiece Scholars is working to fill this gap through a Sustainable Agriculture initiative that provides a means for Chajulense students to grow their own “kitchen” gardens as a sustainable food security program. A school garden can provide children with the vitamins and micronutrients that they need to be healthy, grow, and thrive, and also has the potential to provide an income-generating activity.

Gro Harlem Brundtland, former director of the World Health Organization said, “You cannot achieve environmental security and human development without addressing the basic issues of health and nutrition.” Therefore, before we can hope to effectively address education advancement and economic development, it is necessary to address the huge problem of malnutrition. There is no excuse for more than half of children to be malnourished in Guatemala, and our Philanthropiece Scholars recognize this. They are working diligently to understand the root causes of malnutrition in the community, and to design and implement sustainable solutions toward improved health, economic development, and educational advancement.

Bailey Adams is serving as Philanthropiece’s Program Intern during the summer of 2013. A graduate of our Youth Global Leadership Program, Bailey studies Public Health and International Relations at American University in Washington DC.