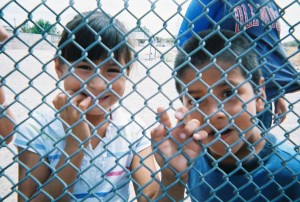 The following story was written by Alicia Conte, Philanthropiece’s Youth Global Leadership Program Coordinator.  Alicia journaled these words when she was a participant in the INVST Community Leadership Program, a Philanthropiece partner organization. She was inspired during her INVST Summer Service Learning Experience in El Paso, TX when she lived at a house for vulnerable groups of people in migration. In El Paso, Alicia had the opportunity to learn about issues related to the United States/Mexico border and immigration, and to bear witness to the lives of immigrants. All of the names in the story have been changed in order to protect, as well as to respect, those whose stories Alicia shares.

The white rocks on the mountain are arranged. They read: “La Biblia es la verdad… Léela.” The Bible is the truth… Read it. I have cried every day since we got here. Each day we have heard stories from those who live here, many who have fled from Mexico, and each day has been hard in its own way. What is the truth? Can there be one in a place of such pain? In a place divided by a wall of wire and hatred? I have found truth in the stories we have heard. Storytelling is truth-telling.

There is a tremendous responsibility that comes with this Border Awareness Experience. I cannot come away from this trip and just forget about everything that I have seen and heard and learned and felt here. I feel that I have the responsibility to give a loud and powerful voice to the undocumented immigrants whose stories I have heard, and whose words are otherwise ignored by our society.

I will never forget how I felt during Maria’s story. Maria: She sits with a backpack on her lap, while tears flood her beautiful eyes. “I was only recently able to open this with my psychologist,” she tells us. It was her seven-year-old son’s bag. The backpack was found in the back of her ex-husband’s car, after he and her son were shot and killed in Juarez. The father was targeted, as he refused to work for one of the drug cartels. Her son attended school in El Paso, where his father lived, and would come home to her in Juarez afterward. Why did they kill him? Why did the drug cartel members murder him? Why did they need to take this innocent boy’s life, as well as his father’s? She unzips his bag and pulls out a yellow folder. Diario, is what is written on the cover.

“I did not want to open this, to read this, because I was afraid of what it would say,” Maria explains, as she clutches her son’s bag and its contents.  She was afraid he wrote about how much he disliked having to live with his mother in Juarez away from school in El Paso. It does not say anything about this. He only wrote about what any innocent, happy seven-year-old would fill his diary pages with. He wrote about Santa Claus. He would write a wish for a present to Santa Claus, tie it to a helium balloon, and set it free so that it might come true. Maria says that this is how she knows he was still so innocent. Her one–year-old son José crawls all over the chapel floor as she speaks.

“I have to lock myself in the bathroom or hide in the closet when I cry. I can’t show José my tears,” she tells us.

Beautiful people with unimaginable stories. I want to be able to take just a piece of their pain – if I can – away from them. I want to lift any amount of their sorrow by listening to their stories and by bearing witness. Maria is courage. She is pain and sadness and immense strength. She is mother.

What is the truth here? I hear the voices of many whom we have heard from, talked with, and learned from here in El Paso, Texas. Not everyone comes to the United States because of the American dream, it may be that they come here because a nightmare in their country.

This is the truth. Storytelling is truth-telling. Maria’s story is the truth, and the truth is her story.