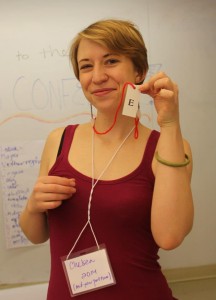 When Passions Converge: A Story of Finding One’s Path and Changing the World Along the Way

Recently I made a return trip to Boulder. This was, in fact, the first time I had been back since I left for New York City in September of 2010. While I was there, my friends at Philanthropiece asked me to share my story with the participants of their Youth Global Leadership group. At first, I asked myself, “What in the world do I have to share that is of value? I am still just twenty-four years old and I still have so much to learn!” But the more that I thought about it, the more I realized that I have learned one kernel of wisdom over my years that is definitely worth sharing. So, when I met with a small group of members of the Youth Global Leadership group in a coffee shop on Pearl Street, this is what I told them…

Around this time four years ago, I was given a gift that changed my life.  At the time I was in the BFA Acting program at the University of Colorado at Boulder.  I was blessed in that I was able to fulfill one of my greatest passions regularly:  performing on stage.  In all respects I was a happy, healthy, and grateful twenty-year old with many prospective performance opportunities in my future.  However, I couldn’t shake the feeling that somewhere along the line, I had let an essential part of myself fall away. When I was in high school I was an actress, but I was also an avid volunteer.  I loved to lend my time to others, especially in any capacity where I could work with younger children.  This varied from being a volunteer camp counselor, to handing out balloons at local festivals, to (my favorite) playing an evil cigarette in a touring show that taught about the dangers of smoking to elementary school students.  With the dual responsibility of coursework and rehearsals, I hadn’t been able to find time to fit volunteering into my university life.  I may not have realized it at the time, but this divergence away from this – the other passion in my life – had made me feel like something was missing.As these things usually happen, it was a chance meeting that turned me around and helped me to once again converge my two passions.  While in the computer lab on campus, I overheard Professor Beth Osnes asking another Theater student if she was interested in traveling to Guatemala during the summer to engage in what she called theater for social change.  The other student said no, but  having recently studied abroad in Latin America, my interest was piqued and I was bursting with questions. Who was that professor?  What was theater for social change? How in the world could I get on that trip?! I tracked Beth down and volunteered myself as translator or luggage bearer…whatever capacity she needed me in, I was willing to do it.  I was desperate to find out what type of work she was doing and see how it could possibly combine the two things in my life that I had always been drawn to, but could never quite weave together. Over the next few months I applied for an internship with Philanthropiece, who graciously supported me, as well as two other students, to join on Beth’s trip.  I read articles and had planning meetings with Beth and the Philanthropiece board members as we prepared to spend close to a month in Guatemala. It wasn’t until I arrived, however, that I discovered the true power of what Beth was teaching me. In Guatemala I saw the potential that theater holds for building community, creating dialogue, and encouraging freedom of voice and discourse.  This gave me a new lease on my career path and poured life and joy into a hole in my spirit that I wasn’t even aware had formed. I was blessed to be introduced to this new form of theater that truly unites the desire to perform with the desire to better the world. However, Guatemala showed me more than that.  By traveling with amazing individuals like Beth, Katie Doyle Myers, Libby Cook, and Joan Knudson, I was able to see that the strength that drives truly world-changing work isn’t the compartmentalization of desires and goals, but rather the ways in which we can make those things converge.  Beth is a shining example of this, as she has combined her love of being a mother with her love of theater to create the Mother tour.As well, Libby and Joan have made a life of channeling their passions into an organization that benefits others, as well as fulfills them personally. Katie Doyle Myers has woven her love of non-profit work with her love of her son into their initiative, 100 Book Day.  Spending three weeks around women like this, it is hard for the lesson not to rub off!

When I returned from Guatemala, I knew that I had found my calling, and it was one that had lived within me my whole life.  In my last year at CU, I founded the student group Performers Without Borders at CU Boulder. At the outset, we worked locally in Boulder with Philanthropiece, the Youth Global Leadership group, and on campus with an Arts For Activism Weekend. Over the course of the year and with the help of the group, I also planned and implemented a return trip to Guatemala the following summer. This time it consisted entirely of theater students who wanted to share the lesson I had learned the summer before. I am proud to say that Performers Without Borders is still an active group at CU today. My journey did not end when I left the university. For the past two and a half years I have been working in the field of Theater for Social Change (or Applied Theater, as I have since learned it is also called). Currently, I use theater to teach Literacy to underserved New York City public school children with an organization called Story Pirates. We teach kids how to write stories and then perform their stories as a sketch comedy, showing students that their ideas are valuable, interesting, and something to be celebrated. I also perform in a touring Theater-in-Education piece focused on Anti-Bullying. Through an interactive workshop (much like the ones I did with Beth in Guatemala), we ask students to act out their ideas of how they would handle the situation if they found themselves being bullied.

As I do this work, I am also continuing to learn and grow by getting my Master’s in Applied Theater. My hope, and what I passed along to the Youth Global Leaders on my return trip to Boulder, is that I always continue to develop and discover my passions and that, in doing so, I can continue to  incorporate those passions into the work I do, becoming the fullest person possible, and perhaps even changing the world along the way.