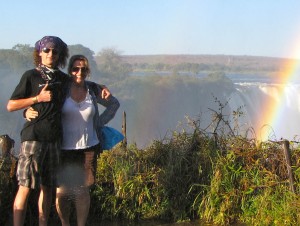 Lisa and her son, Max, at Victoria Falls

WHEN DID YOU GET INVOLVED WITH PHILANTHROPIECE?

I became involved in January 2010 when the Philanthropiece Advisory Board was exploring the option of a youth program in Boulder. As part of the process, they hosted a Design Retreat that my son and several other kids about the same age were invited to. I was the carpool person who drove out to the barn with the kids and after everything got rolling the Philanthropiece group realized they were short adults for little breakout sessions. Since I was pretty handy with a marker and butcher paper, I volunteered to help. To make a long story short, I thought it was really interesting. I liked the idea of service and the focus of it being very global in the sense of how our community is enriched by its citizens, but also how we try to enrich and help other parts, whether in our community or further out, in sort of a ripple effect.

WHAT KIND OF WORK HAVE YOU BEEN DOING FOR PHILANTHROPIECE SINCE THEN?

Right now I am on the OM team, which is the “oversight and management” team for the Youth Global Leadership program (YGL). In a nutshell, my role can be described as a mentor to the participants. Initially Lee Lazar and I got together frequently with the core group of youth to create the YGL program. It was very impressive to work with young people who were so passionate and directed. As an integral part of the design process for the program, the group went on a service trip to Baja, Mexico. Lee Lazar, Jordan Bailey and I were the adults along with 6 YGLers on that trip. Ever since then my involvement has been everywhere from hosting monthly meetings to attending focus sessions. I facilitate, mentor, and do a lot of listening, and a lot of learning. It’s extraordinary how much a high school student has to teach me and how much the program can teach me as well. Non-profit organizations are a world that is really new to me and I absolutely love it!

WHAT DO YOU THING THE BIGGEST CHALLENGES ARE FOR YOU?

Really the only challenge is time. Being a single mom and an 8th grade teacher takes a lot of time. During the school year especially, teaching is so time consuming. It has been really nice this summer because I am around and I have more time for YGL events. Ideally, I will be around for a long time so, when I retire from teaching I will have more time to help.

So many things inspire me! I love being a mom and teacher, traveling, talking with interesting people and learning. I am interested in how everything is so interconnected, which makes it almost impossible to say I am most inspired by this or most inspired by that. As soon as you think there aren’t connections something disproves you and you can find some other connection. For example I just watched a NOVA program Earth from Space, in which it was explained how the brine and the plankton that are sinking to the bottom of the sea near Antarctica will, in millions of years end up as dust floating across the ocean to feed the rain forest.

I have been pretty lucky to have some very good parents. They were so supportive when I was a kid. I am probably just now really, truly understanding how supportive they were. They always told me I could do anything I wanted. They also just let me do things, like going to summer school in Mexico when I was sixteen. I also had some really good teachers. My horse instructor when I was a kid was born around 1912, so by the time I had her as an instructor, she had already lived a very full life. Even though I was so young, about 9 or 10 years old, just knowing people like her and her husband was so awesome; they were so present and were really there for me. I did have some pretty great teachers in school too. There was also one person that really inspired me when I was traveling from Arizona to Peru. In Guatemala I met this nurse who was a vegetarian. She explained to me why she wanted to be a vegetarian and it made more sense to me than when anyone else had explained it. It was all about the inter-relatedness of the earth and eating meat. I didn’t become a vegetarian right then but her voice and her reasoning has always stuck with me and eventually, many years later, I did become a vegetarian. Finally, people who are so innately altruistic and passionate and are willing to take risks and go to the next step are so inspirational, which brings me back to the YGL girls. They are really inspiring. Every time I see them I am completely impressed. They are so remarkable, being so young yet having so much passion and motivation.

WHEN DID YOU KNOW YOU WANTED TO DO WITH YOUR LIFE?

My initials are L.A.W. so I had always planned on being a lawyer, because that’s how kids think. In college I took a diverse course of study. As an undergraduate I majored in Anthropology and minored in Political Science and Sociology. I thought that would basically get me into law school. After college I went traveling and I decided I wasn’t so sure about law school anymore. But I decided I would take the LSATs and go to paralegal school first just to see how much I liked law school. I got a job as a paralegal for a year and I did not like it. What I learned about myself very quickly was that I don’t like to sit in an office doing tons of paperwork. Also we were representing the side that I morally didn’t feel very comfortable representing. I had also done an internship with the public defender in San Diego and that really burst a lot of dreams I had too. I learned criminal law is mostly about due process and in my opinion the system wasn’t helping people in the way I had envisioned. I decided to stop being a paralegal and decided to go back to school and get my PhD in Anthropology. While I was taking a graduate class on ancient Egyptian archaeology, my friend who taught sixth grade asked me to come speak to her class. So there I was, with a super old school projector, talking to them about King Tut. I told my advisor how fun it to teach that class and he told me that if I really liked the teaching part I should really think about being a teacher. He gave me all these very practical reasons. He knew me really well since he had had me for three or four undergraduate classes and he recognized that I didn’t really like to write all that much. He told me that if I was going to be an anthropologist I was going to have to get published, get grants etc. And if I got my PhD in Colorado I probably couldn’t stay in Colorado. I would have to go do field work and then would probably end up somewhere else. So for all those reasons, I thought maybe I should be a teacher. Teaching is actually a really fun job even though some people think I am insane to teach middle school. It’s just exciting, creative, it’s different everyday, and teaching is often very inspirational.

WHAT SUSTAINS YOU ON A DAY-TO-DAY BASIS?

Definitely my son! I also really get to work on several levels with really cool people. My whole day, from talking to my son Max in the morning and after school, to who I talk with during the day, to YGL meetings, to the I Have a Dream program (another volunteer position for me); I get a lot of intellectual stimulation. Taking my dog for a walk is also something that I have to do for my mental well-being. Especially since my days are so chaotic during the school year, I need to have a lot of mental and physical stamina. It’s so nice to just go outside and have that time to relax.

WHAT IS ONE THING THAT YOU REALLY LIKE ABOUT YGL?

One part I really like about YGL is that it embraces students who don’t necessarily have a niche at a big public high school. The topics that other high schoolers care about are not always the issues that the YGLers care about. I have been asked, “Why do you support these kids, they are so awesome. Why do they need help?” One reason is that, YGL is fostering future leaders and yes, they all have amazing credentials, passion, motivation, and commitment, but somewhere that needs to be nurtured and that doesn’t always happen for a lot of kids. I have learned that some adults are so quick to say these kids “will be fine,” but I don’t necessarily agree with that. For some of them their families aren’t able to be involved in their lives and their passions. There are many factors for that: the YGLers are trying to become their own person and their families might not share the same interests or necessarily have the time. I love being able to help YGLers find a niche, do service and talk with everyone about their COR projects. Helping as much as I am able is really meaningful and inspirational.