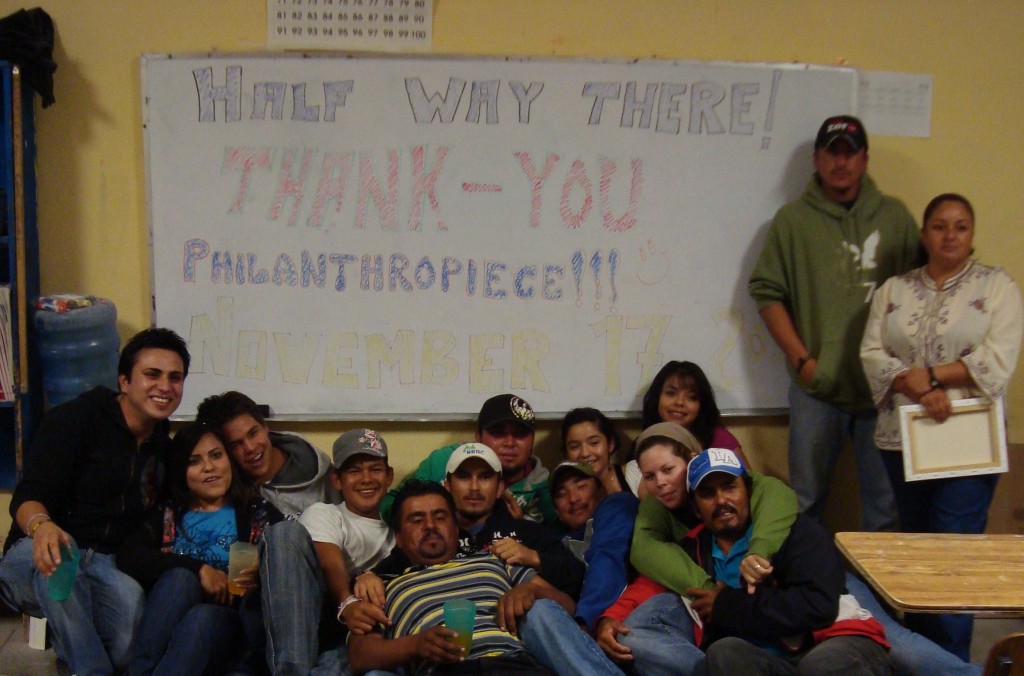 The community of Laguna San Ignacio has placed the need for an English immersion course at the top of their priorities since the inception of our work with them in 2007.  In response, Philanthropiece sent down Deb Halstead, volunteer extraordinaire, to provide an English Language program.  This program is a 10 week commitment, with classes meeting 5 days a week for 4 hours each day.  Below is an update from Deb that clearly shows the success of the program!

I got a hug today—from my student Debora Maciel.

I want to share her story because it speaks to the reason Philanthropiece conceived the English Language project, Baja School Friends supports the project, and the reason I volunteered to spend 4 months designing and implementing the program.

Debora is an artist.  She learned to paint about 7 years ago, and has since started making beautiful items from recycled materials, including paper mache turtles and whales.  She sells her art at the various tourist camps during the whale watching season (January to April), but has had a struggle to understand what the tourists are saying to her.  Usually she would have to ask someone to help her with the transactions, and on more than one occasion “someone” wasn’t available.

I spent several hours with Debora at her home shortly after we began the classes, and she shared with me both her art and her dreams.  This visit became the basis for our first of several “special topic classes”.  Such fun!!  The entire class was animated and intrigued to learn more about Debora’s art, and enjoyed doing role plays with “artists” and “customers”.  Roberto, Noe, and Daniel are the stars in our Special Class on “Selling Art”.

Yesterday she took her art to the tourist camp Kuyima to sell to Grupo Tortuguero, a research group that is currently lodging there. When she arrived early for class today (as she almost always does!) I asked her if she had sold many things at Kuyima.  Her face just lit up.  “Yes!!” She said.  “Lot’s of things!!  Muchos y muchos!!”  She was so excited!  “I could understand them!!  And they knew what I was saying!!  And they were so nice to me!!  And they bought so many things!!  Thank-you, thank-you!!  Because you helped me I could do that!!”  We exchanged a great big hug…and were even a bit teary eyed…

More about Grupo Tortuguero…who generously invited me to bring my students to speak with them at Kuyima this past Sunday night.  This was a spur of the moment invitation, but 4 of my students (Maria, Victoria, Pedro, and Santiago) courageously showed up to try their conversational skills with a room full of English speaking researchers and their assistants.  Talk about confidence building!  “If you can make it there, you can make it anywhere…”  They were all tries and smiles, if not always sure of the English swirling around them.  I still see Santiago at Kuyima, nodding gamely while the tech guys tried to explain how they were repairing the monitoring device!

One of the great things about both these stories is that several of these students are not the “best” at English.  Several of them tested near the bottom of the beginning level when they started.  They’ve come to class, arrived on time (well…mostly), helped with extra projects, done their homework, and acted on the personal suggestions I’ve given them.  Most importantly, they are part of a supportive community of classmates and relatives who are willing to mentor and practice with them.

When I started teaching here I really wasn’t sure what to expect on many levels.  I’m happy to say that the majority of my students have exceeded my expectations, and 11 of the initial core of 16 are still “standing” 7 intensive weeks later, after 35 classes.  Eleven classes left to go, and graduation is on December 18th!