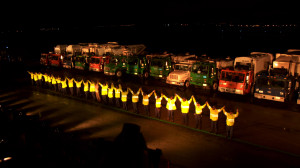 Dance” during her Women and Development class, taught by Philanthropiece friend and colleague Tracy Ehlers. Trash Dance was featured in this year’s Boulder International Film Festival as part of the Call 2 Action program that Philanthropiece co-sponsors, and we think you’ll be as intrigued as we were to learn from Heather about what this film taught her.
Contemporary dance has never meant a lot to me. I’m able to appreciate it as a form of expression and art, but I have never been able to relate to the carefully choreographed movements on any kind of deeper level, to see it as an expression of storytelling. I had never been able to see it as a way to make something completely ordinary very beautiful or to bridge seemingly wide socioeconomic or cultural gaps between groups of people. Yet Trash Dance does all of these things. In this award winning documentary, filmmaker Andrew Garrison follows Allison Orr, a choreographer, as she creates a production that finds the beauty in the daily lives of the men and women of the sanitation department of Austin, TX.
I recently watched this film in my Women and Development course at Denver University; a class that focuses on the challenges faced by women and girls around the world. As our professor, Tracy Ehlers, introduced the film, I was skeptical about its connection to our coursework: how does female genital mutilation in sub-Saharan Africa relate to a contemporary dance choreographer and her project with sanitation workers in the United States? The tie in came when we began to talk about the idea of participatory development, a core theme of our class. Orr brings to life the idea of participatory development. She went into the project with very few expectations or preconceived notions, and she began her work by going en route with each of the workers, learning about their jobs, their families, and their stories. Eventually, she begins to choreograph a dance that showcases the work and lives of the Austin sanitation workers. Every step and movement is created with input from the workers. Orr draws on the expertise of each man and woman before making decisions and bringing it all together in the final performance.
Although she never uses the word “participatory development,” the work done by Orr embodies the idea. Participatory development at its core means involving local people in decisions that affect their lives. It creates leaders and change agents by pulling from the expertise of the local members of that community. Participatory development puts the power in their hands, and the job of the participatory development practioner is  to support local people in realizing their full potential in creating positive social change. Participatory development has the great potential to lead to  empowerment, and this is perhaps the most important piece that Orr brings to the sanitation workers. She portrays a societal role that most people take for granted and think of in only fleeting terms, as something that might even be seen as a little dirty or distasteful. She takes that role and flips it on its head by highlighting each individual for his or her unique role and for what makes them special – from harmonica players to boxers, from roller derby break-dancers to loving fathers. In the end, the Trash Dance viewer is, at the very least, left with a new found appreciation for sanitation work. At best, and for our class, watching Trash Dance was a way to witness the application of participatory development through the medium of dance, in a way that was both unique and inspiring.

Heather Cook is currently a sophomore at the University of Denver. From Kansas originally, she loves going to school so close to the Colorado mountains. She also loves travelling, cooking, and hiking. An International Studies and Environmental Science double major, Heather will be studying abroad in the Fall of 2013 in Ulaanbaatar, Mongolia.
Share Tweet Share Pin