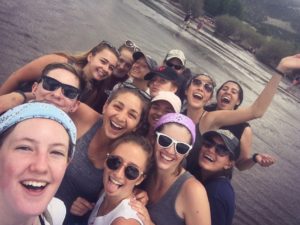 Our Youth Global Leadership group is on their fourth annual Insight Trip. This month, they are taking a journey through the US Southwest during which they will learn about the interconnectedness of social and environmental justice issues in the region.  This is the first in a series of blog posts from the road to document the 2017 YGL Insight Trip!

It is Day 5 of the Insight Trip! Spirits are high and mosquito bites are numerous! The group has connected on a deep level with one another and with the material we have absorbed. Here’s a quick recap of what we’ve been up to.

The Food Committee set out on a trip to the Costco while the Documentary Crew learned about the cameras, the Gear Committee checked the tents, and Budget Crew tracked the expenses. We organized ourselves and had a welcoming ceremony. We slept in the barn and watched a documentary called Harvest of Empire.

The day began at 6:45AM with journaling and exercise. We returned to a delicious breakfast and got ready to head to Denver. We all got in the van and drove to the city to visit Gwen Murphy. Gwen works with AFSC (American Friends Service Committee) and she led us through various exercises to think about wealth disparity and ancestry. We then went to Cheesman Park, ate doughnuts, and debriefed our earlier discussion over lunch. Then, we drove to a place called Casa De Paz and met Sara Jackson, the woman who started this nonprofit. Sara rents a house and provides a place for people recently released from the nearby detention center, and the families of the detainees. We listened to Sara’s story and then helped by cleaning her house. Then, we went to the detention center itself and spoke to Sarah Schnall, who works with various youth organization, currently serves as the Youth Specialist for the Genesister Program of Boulder County, and provides legal assistance to immigrants. We then got food from Noodles and Co and continued our conversation with Sarah. The group came together for a game of volleyball, and watched some cat videos before going to sleep.

Once again, the group woke up early for some exercise, returned to the barn, and left by 9:00AM. We planned to camp at Mount Princeton, but, due to weather, our plans changed and we headed to lower elevation and the Alamosa Campground. The campsite was gorgeous although it was filled with mosquitos. We kept the bug spray coming and built a wonderful fire. We had tacos for dinner and sat around the fire to discuss today’s culture of competition and the education system in place. We set up tents and went to bed!

We woke up at the late time of 7:30AM and completed our morning workouts. We ate breakfast, and at 9:30, we departed to the Sand Dunes. There, most of us wore sandals, a mistake we soon regretted. We hiked and played in the water, and then left to have lunch in Alamosa. We did journaling and various team building activities, before leaving to go back to our campsite. We had dinner, and sat down for evening embers, led by Kira and Maddie. We went to bed, ready for our next adventure: Casa Taos!!

Kira: Listening to Despacito on repeat.

Isabelle: Watching a large group of mainly shirtless men in short-shorts running through Cheesman Park (we later learned they were from the army raising awareness about veteran suicide and PTSD).

Grace: Running with the marathon runners in the morning.

Maddie: Frolicking in the Sand Dunes!

Sofia: Morning runs at the campground.

Isabella: Playing cards by the campfire!

# of canisters of bug spray used solely by Malaika: 2 (full-sized)

# of people that wore sandals to the Sand Dunes and had regrets: 8

# of times Rae has been oblivious to major landmarks: 4

# of times plans were changed: too many

Thank you to the YGL Insight Trip Documentarian Committee for capturing these notes from the road! Learn more about Philanthropiece’s Youth Global Leadership program here.