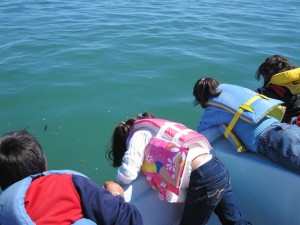 Whale Watching for the Children of Laguna San Ignacio

No sooner had I stepped out onto the dusty, windswept landscape of Laguna San Ignacio than I saw Antonio and Maria Aguilar stepping out from their house, walking towards me across their pebbled driveway.  I dropped my bags and quickly jogged towards them and was welcomed with a mélange of ‘Holas’ and smiles and cheek kisses and hugs.  They instantly invited me into their kitchen for a deliciously fresh-cooked halibut filet and a catch-up on all that had happened in their lives since I last saw them, almost a year previously.  As I sat at the table, I had the most comforting feeling, a feeling that came from knowing that I had returned ‘home’.

I had arrived in LSI to represent Philanthropiece at the 10th anniversary celebration of the defeat of the Mitsubishi saltworks plan and to take part in the 2nd annual environmental education program that I had helped to start when I was living and working in LSI as the community liaison last year.  After my meal and catch-up with the Aguilars, I headed over to an evening symposium held for community members and visiting NGO’s who were also in town for the anniversary celebration. The palapa was abuzz with conversation and it was a chance for me to reconnect with many more friends and community members from the previous year.  It was also a nice chance for the community to reflect on how far they had come over the past years.  I sat on a panel and got the chance to talk with community members regarding their concerns and hopes for the continued development of LSI. It felt good to be at the front of the room, discussing Philanthropiece’s ongoing projects, knowing that we are making a real difference and having a positive impact on the LSI community.

At 9:00 the next morning, I met at the primeria school, where over 100 excited students waited to board two buses, which would take them to the water’s edge, where all the folks from the previous night’s symposium waited, to see the children off on what was for many their first whale-watching trips.  Twelve pangas (wooden fishing boats) and their driver’s services had been donated for the children’s special whale-watching excursion by all the local eco-tourism outfitters.  Several outfitters had also donated their bus and a lunch for the children after their trips.  It was a wonderful collaboration between many different groups and the fulfillment of a vision that I had last year when Steven Schwartz and I started the first environmental education program from the school children of LSI. Watch the wonder of local children seeing their marine neighbors here.

My remaining time in LSI was a chance for me to take a couple trips to see the beautiful gray whales out in the lagoon and to see all of the projects that Jordan Bailey, the current community liaison, has been working on.  Some were a continuation of programs that I had helped develop and some were created from his own initiative.  It felt good to see all the energy and momentum that the projects had and it helped remind me that my relationship to the LSI community was continuing to grow and change.  More than anything else, I think my return ‘home’ to LSI gave me the opportunity to feel proud to be a part of Philanthropiece, proud to be a part of something larger than myself and yet, something that has also shaped who I am and who I have become over the past year.