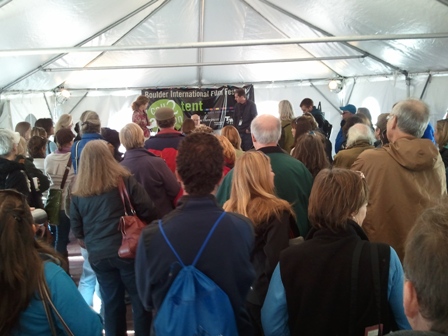 You may be asking yourself, what is Call 2 Action? The Call 2 Action program began in 2010 and offers concrete ways for film-goers to translate the energy and passion that the film evokes into action. How you might wonder? A tent was setup on Pearl St which hosted post film discussions and connected viewers with local community groups and nonprofits that were related to the film. Philanthropiece partnered in the evolution of the Call 2 Action Films and Tent, and helped to assist in the pairing of local nonprofits and community groups with post film discussion goers. To read more about the BIFF Call 2 Action Series visit – http://www.biff1.com/call-to-action.html

BIFF and the Call 2 Action Tent had many energetic volunteers that weekend! Friends and members of The Philanthropiece Youth Global Leadership program helped out by volunteering. Here are a few comments about the experiences from volunteers and viewers:

Being a part of not only BIFF but the Call 2 Action event was a wonderful experience. I had the chance to see the dynamic and unique parts of the Boulder community and meet some amazing and very intelligent people. The main person I got the privilege to work with was the lovely Sue Raab who co-coordinated Call 2 Action this year. She helped make my volunteering a superb experience full of many laughs. I hope to be back next year and watch as the moving Call 2 Action series continues to develop.  —   Alieya Evison

Perspective of a viewer:
Katie and I went to see  a screening of The 1st Grader during the Boulder International Film Festival.  It was a very inspiring story that portrayed courage, persistence and a look into  Kenya and it’s history. Afterward I visited the Call 2 Action Tent where I learned more details about the film, information about education in Kenya, and the main characters in the film through a questions and answer session.  Engaging in the discussion added another layer of depth to the film’s message, and provided further insight to the story. After discussions about the film concluded, local nonprofit, Boulder Reads, presented and provided information about their work and the importance of literacy and how it can affect a person’s life. Boulder Reads presenter Diana Sherry was able to draw connections between the film and scenarios from student’s experiences at Boulder Reads. Having the nonprofit present at the Call 2 Action Tent brought the film’s message closer to home and opened avenues for those who would like to become involved with the organization.  I am so glad I had to opportunity to check out Call 2 Action and that it is part of BIFF!  —   Rebecca Lewis

Perspective of a Philanthropiece Staff Member:

For instance, we were able to team up with Urgent Action Fund (UAF) to co-present The Green Wave.  From what I’ve heard, Kris Abrams of UAF gave a very moving presentation following the film and we received great feedback, both about the film and about Kris’ talk.  Kris sent the following message:

I wanted to take a moment to thank you so much for inviting us to participate at the film festival. I was so deeply moved by the Green Wave, and also by your work and your vision in incorporating the Call to Action piece.   We raised $1,000 that night! – No kidding – it was $990 and then my housemate kicked in the last $10 after I counted it. 🙂

This confirmation, along with word from the Wild Foundation (co-presenter of The Last Lions) that they have a potential new volunteer, reinforces for me the power and impact we can have when moved by film to move from concern to action. — Colleen King

If you were a film-goer at the Boulder International Film Festival and had the opportunity to view a Call 2 Action Film, write about your experiences below. What film(s) did you think were most impactful?  What did you learn? Were you able to connect with a local community group after seeing a film? Which films would you recommend and why?