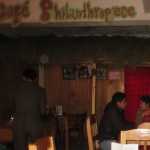 A New Community Space for Chajul

Since their start in September, the Cafe Team of Philanthropiece Scholars has had a rough time…until now!  They recently upped their marketing game and now they almost have more business than they know what to do with!  The cafe is run by six Scholars of varying ages.  It is located in the Philanthropiece office and has a full breakfast, lunch, and dinner menu.  During the day, it’s a prime study or work location, and the Scholars often deliver meals to places like the municipal building and the hospital, on top of serving customers in the cafe itself.  They have regulars who come in every day, sit in the same spot, and order the usual, as well as new people trying out the cafe for the first time each day.  At night, the Scholars light candles on the tables, and it becomes a great place to take a date!

Once the Scholars started handing out fliers and posting them in local shop windows, the customers started pouring in.  It was a big adjustment at first.  The Scholars were already going to school and trying to fulfill the obligations of being in the Scholars program, as well as working in the now busy cafe every day from 8 to 5.  With the influx of customers, the Scholars decided to make schedules where everyone takes shifts, making it a lot easier to balance the different facets of their lives.  Now they have plenty of time to focus on school without having to sacrifice the wonderful service they provide each and every customer who comes into the cafe.

Most of the families in Chajul are coffee farmers, but ironically most of them drink cheap, instant coffee because the coffee they grow is too expensive.  The “coffee culture” of the U.S. where anyone can sit and enjoy a quality cup of coffee in a local coffee shop doesn’t exist in Chajul, but the Scholars are changing that.  Café Philanthropiece serves organic coffee produced by the Asociación Chajulense, so community members can directly enjoy the fruits of their labor.  While this changes the culture a bit, it also benefits the community in many ways.  The Scholars are doing a great job of implementing something new while listening to the needs of their community at the same time – something that a lot of development experts have not yet figured out!

The pinnacle of success for the cafe was Valentine’s Day.  They held a dance that evening with over 75 people in attendance!  All the other Scholars came and brought their friends and families.  Couples, young and old, flocked to the cafe to see if they could win the couple’s dance competition.  Tickets were one quetzal at the door and the team raffled off prizes (like free food!) throughout the night.  The cafe actually ran out of a few of their products.  Everyone was asking when the next event would be and begging the scholars to do something similar as often as weekly!  Because of the considerable time it takes to plan this type of event, the Scholars are aiming to hold some sort of event once a month, including more dances and a few movie nights.  The next event took place Wednesday, March 11th – another festival themed dance!

The Scholars are excited to offer this kind of opportunity for the people in their town because it is something that hasn’t existed there until now.  There is a small cafe that opened up close by after the Café Philanthropiece, but the Scholars say it doesn’t really offer any competition because they only sell coffee and bread.  They don’t have a full food menu like the Scholars’ cafe does and they don’t do any special events to draw people in, making Café Philanthropiece truly one of a kind.  The cafe is becoming the place to be, whether to just hang out during the day, to have lunch with a friend, or to enjoy a Friday night on the town.  The community is coming together to experience this new “coffee culture” and take advantage of fun, never-before-offered activities.

Caitlin Mendenhall just graduated from the University of Denver with degrees in International Studies and Spanish.  As the Program Intern at Philanthropiece, she is thrilled to get to work closely with the Philanthropiece Scholars and learn more about the amazing work they are doing!